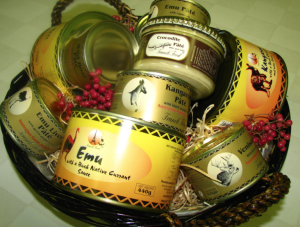 Sharing forgotten tastes, lost techniques, rediscovering and reinventing some of Australia’s culinary treasures is a great way to share our food culture with new settlers and tourists alike.

Many bemoan the fact we do not have a pure Australian cuisine to share with the world. The fact is there are very few ‘pure’ cuisines. They are the result of geography, climate, politics, economics, industry and transport, blended with the influence of traders, invaders, migrants and travellers over the centuries. The variety, freshness and invention in our fused cuisine is a most powerful tourism selling proposition, borne out by the success of Tourism Australia’s Restaurant Australia campaign.

Jacqui Newling is an alumna of the Master of Gastronomic Tourism (Le Cordon Bleu and Southern Cross University). Her research and passion resulted in her becoming resident gastronomer for Sydney Living Museums and a much loved author and speaker on Australia’s historic gastronomy.

Here I have shared a few interesting and perhaps lesser known tidbits from her 2015 book, ‘Eat Your History: Stories and Recipes from Australian Kitchens’. As I read her book, it was apparent how much of a renaissance we are experiencing with our traditions – especially with open flame cooking, foraging, game, preserves, artisanal breads and dampers, charcuterie and the use of native ingredients.

As an island nation, seafood has never gone out of fashion and is still key to our culinary identity. While the indigenous aboriginals enjoyed fish roasted over an open flame, the settlers preferred it boiled. Anglo-Indian Kedgeree, Seafood Chowder, Oyster Loaves and Eel baked or prepared ‘roll mop’ style where enjoyed, while fish and chips first appeared in cities around the 1890’s.

Kangaroo and wallaby tails were considered superior to oxtail and used for rich soups, stews and in the 19th century for Anglo-Indian curries. Kangaroo Steamer and Jugged Wallaby were the equivalent of the English Jugged Hare. Some steamer recipes were more like ragout, casserole or savoury mince but kangaroo was always mixed with pork to add some fat to the lean kangaroo meat.

Emu was highly valued by the First Fleet, but wild duck, quail, brush turkey and wonga pigeons were more common table birds. Brush turkey and wonga pigeons are protected species today. Early 20th century cookbooks describe stuffing birds with “breadcrumbs seasoned with lemon zest and herbs, rolling in flour, laying them in pie dish on a bed of bacon and filling any gaps with hard-boiled egg and stock, before covering in pastry and baking in a slow oven.”

When James Ruse, our first farmer, announced himself ‘off the stores’ (not using government rations), he was granted 30 acres by the governor who named it ‘Experiment Farm.’ Ruse proved that small settler farms were viable and went on to grow a plethora of fruit and vegetables including the New World tomato. By the end of the 19th century tomato chutneys were enjoyed used with meat, cheese, a ploughman’s lunch or kangaroo burger. A Baked Carrot Pudding recipe from Beeton’s 1863 cookbook was served cold, a light alternative to fruitcake.

Early 19th century diners enjoyed bananas, custard apples, figs, guavas, loquats, melons, peaches and apples. So plentiful were peaches that not only were they made into cider, but pigs were fattened on the dropped and fermented fruits in the orchard. A Peachy Pork recipe from 1904 celebrates this delicious marriage. Seasonal fruits and vegetables were preserved using Fowler’s Vacola kits. Old recipes for summer barley waters from oranges and lemons and vinegar cordials from raspberries might even provide inspiration for the experimental mixologists of today.

Wheat was difficult to grow in Sydney soil and there was inadequate milling equipment to grind it so even at the governor’s table the invitations were always inscribed with “bring your own bread.” The Hawkesbury had more success growing wheat and the first windmills came to Sydney in 1797. White flour was graded finest, while the heavier coarser grinds with some wholemeal retained was graded lowest. Coal cooked dampers appeared in the 1820’s while in the cities bread was free form baked until 1830 when baking tins came on the market. Bread Sauces and ‘Charlottes’ were popular and bread rolls were hollowed out and used instead of pastry and filled with oysters or mushrooms. Christmas pudding recipes sometimes contained bread crumbs rather than flour.

Beef was spiced, salted, or corned and whole beasts were spit roasted for celebrations served with gin and strong beer. Raised pies were made with stout, suet pastry and filled with beef, mutton, goat or rabbit. Goats were primarily used for milking. Large cuts of mutton were boiled up to the 1930’s and served with rich milk based parsley or buttery caper sauces. Meat was presented as a soufflé or quenelles by steaming and boiling fine textured meatloaf or meatballs and serving with a béchamel style sauce.

Pork was dry cured with salt, pickled in brine or smoked. Trimmings and left overs were cooked up with the heads to make brawn. Nothing was wasted. Pickled or cured beef tongue was popular and sheep heads were braised, sautéed, boiled or made into soups. Brains, sweetbreads, kidneys, livers and trotters were all valued. Reserved for the finest society tables, jellies were made using boiled calves feet and took hours to produce until commercial gelatine became available in the 1840s.

Eggs were enjoyed as we do today, soft and hard boiled, poached, scrambled, scotched and made into sweet and savoury omelettes. Custards and fruit curds were enriched with egg yolks and whites used for meringues and snows. Before the rotary beater, whisking egg whites to stiff peaks took up to an hour of beating with a switch of cleaned twigs bound together. There were many eggless alternative recipes created during the Great Depression and wartime rationing.

Milk prepared in domestic dairies was processed to provide, cream, butter, buttermilk and cheese. Ice cream churns of the 1840s were developed along similar principles to the electric models of today, but relied on the availability of ice and coarse salt. Cream was used in syllabubs and rarebit, simple cheeses used in Regency cheesecakes and fondues that were really soufflés. While the French use lard or duck fat for confit or rillettes as a method to preserve meats, early settlers ‘potted‘ cheeses, cold cooked meats, shellfish, anchovies or mushrooms with assorted herbs and spices pouring clarified butter over to fill the gaps and prevent spoilage. These same fillings pounded with fresh cold butter were used to make a poor man’s pâté.

Native foods were eaten at formal banquets, evidenced in menus of the 19th century. They fell out of fashion in the early 20th century being associated with poverty and uncouth ‘bushies’. In the 1980’s there was a resurgence of interest in native foods among a small group of providores and restauranteurs. Again we are experiencing a resurgence in foraging and native foods with lemon myrtle, bush tomatoes, quandong (desert peach) and finger limes available from specialist providores.