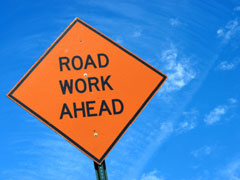 Being positioned on a main road with road works in front of the property most of the time did two things:

It allowed us to benefit from passing traffic to promote our website on signage at the traffic lights and created the imperative of developing a good website which grew from providing about 2% of business in the first year, to about 70%  ten years later.

It forced us to invest time and energy into regional shows, heritage fairs, historic house open days, Woodworker magazine open days, community expos and the weekly Sunday Markets in Windsor for a time to improve exposure.

We outgrew the smaller shows and moved on to doing the Royal Easter Show for three years. The Royal priced itself out of the market for artisans and we moved to doing the Timber and Working with Wood shows. The secret of the timber shows was to always be demonstrating and spruiking. The noise, dust and spectacle drew people to our stand like a magnet.

To supplement our sellable items at shows, we released our rocking horse plans and developed other plans for horsey products which ranged in price from $15 to $35 for the more complex plans.

We used a large 7” carving disk of our own design on a large grinder and around this time had some 4” ones made so we could use a smaller lighter 4” grinder. This disk became a big seller at the Royal and Timber Shows. We had them made in batches of 20 at a time and gradually increased the order sizes over the years. The the biggest boost to sales being when the classes started and every student fell in love with them.

We released a DVD “Horsin’ Around with Power Carving”. I had a friend from previous life who was a camera/production man and he came out and filmed all day – 6am till 9pm. We made the horse in real time and he compressed it into a 90 minute instructional DVD. He knew we could not pay him, but was happy to take a large horse in exchange.

When we eventually got time to make his horse, we found we had enough money to pay him the money instead. That was some 18 months later! The DVD was great, as we expended the energy and money once and it has continued to be a great seller at $35.