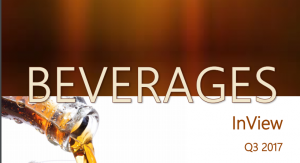 Implications of the Sugary Drink Tax Tested in Philadelphia

A study examined the purchases of sweetened beverages in the Philadelphia market after the city instituted a new tax on January 1. The research compared sales of various beverages both inside and outside the city limits from January-May in both 2016 and 2017. The overall findings are that the Philadelphia sugar tax has significantly affected beverage sales within the city limits and increased sales at stores outside the city as people travel to the suburbs to purchase their sweet drinks. Specifically, sales volume of carbonated soft drinks fell 55% inside the city and rose 38% outside. Dollar volume of energy drinks declined 44% in the city core while ready-to-drink coffees and teas were down 37% and refrigerated juice drinks were down 47%. (Source: Beverage Industry, August 22, 201

BudLight and Pepsi are both promoting their beverages via Snapchat as part of the National Football League season. Pepsi is adding a Snapcode on specially-marked beverage and food packaging. When the code is snapped, consumers will be randomly assigned an NFL Team. If that team wins a game that week, the participant will receive rewards. Everyone will be entered into weekly drawings for prizes. Bud Light is selling custom cans and bottles for 28 NFL teams. When customers take a photo of the packaging, they are entered into a sweepstakes for Super Bowl tickets and unlock team-specific Snapchat filters and a Bud Bowl Snapchat game. (Source: MarketingDive, August 18, 2017)

Brewers are introducing morning-friendly beers to appeal to diners at breakfast and brunch who may be looking for something different or want a lower-alcohol drink earlier in the day. Approximately 60% of adults like to drink an alcoholic beverage at weekend brunch and 21% drink beer during the dining occasion. Beer at brunch encourages people to consider beer at other times of the day and facilitates new food pairings. (Source: The Wall Street Journal, June 27, 2017)

Heineken’s Strongbow Hard Apple Ciders brand introduced Strongbow Artisanal Blend. The new flavor is made with heirloom cider apple varieties which are cold-pressed and blended together. A massive consumer sampling of four-pack mini-cans with a suggested retail price of $1 will begin in September to drive awareness and trial. The launch will also be supported with a national television advertising campaign, in-store merchandising, digital marketing, and public relations efforts. (Source: Beverage Industry, July 11, 2017)

Angel City Brewery will host its fifth annual Avocado Festival, a two-day event featuring all things avocado including the brewer’s Avocado Ale. Avocado Ale is a creamy Kölsch-style beer brewed only once a year for the festival. The beer is made with avocado, honey, cilantro, and lime juice and has a very short shelf-life. (Source: Brewbound, July 19, 2017)

New Belgium Brewing has launched a new video series. Greater Lengths focuses on the people that go the extra mile with the goal of showing every journey has a great story. The first videos in the series feature the Boise Bicycle Project as well as stories of some New Belgium’s employee-owners. Additional videos will be added to their YouTube channel throughout the year. (Source: Brewbound, July 20, 2017)

A new report from the Brewers Association discloses that production growth for U.S. craft breweries was 5% for the first half of 2017, the slowest rate recorded in 13 years. The last time production for small and independent breweries – defined as less than 25% owned by a noncraft beer company and producing less than six million barrels annually – was 2004 when 1,400 craft beer companies brewed 5.8 million barrels of beer. In 2016, more than 5,200 companies produced more than 24.5 million barrels. If the growth rate holds for the year, 25.8 million barrels of beer is expected. (Source: Brewbound, August 1, 2017)

Online alcohol marketplace Drizly reports millennial consumers who have used its app which arranges delivery of alcoholic beverages have steadily been shifting their dollars towards beers brewed by large breweries (aka “macro” brands) and their corporate-owned craft brands. Macro brands represented 58% of beer sales on Drizly during the second quarter of 2017, despite the fact that 90% of the beers offered through the app are craft brews. Craft beers are preferred by Drizly customers in their 30s. (Source: Brewbound, August 24, 2017)

Coca-Cola using AI and Geofencing to Target Type of Shopper

Coca-Cola is using machine learning to figure out consumers based on any available information. A recent digital signage pilot with Albertsons Supermarkets served up ads based on data gathered from nearby cell phones. On-premise beacons measured how quickly shoppers were walking to determine what kind of shopping trip – fill-up or fill-in – and then marketing to that type of trip. (Source: VentureBeat, July 5, 2017)

Carbonated soft drinks continued to struggle in 2016 with volume declining for the 12th consecutive year. The decline is expected to continue with a 1.4% compounded annual rate through 2020. Carbonated soft drinks accounted for 19.8% of share of stomach in 2016, down from 22.7% in 2011. Dollar sales of carbonated beverages sold in stores declined slightly (0.1%) last year to $27.6 billion. Ginger ale went against trend with a 9% sales increase last year due to consumers opting for the functional and digestive health benefits of ginger. Natural soft drinks also recorded a 16% growth rate, though they account for less than 1% of the market. (Source: Beverage Industry, July 12, 2017)

Sales of ready-to-drink tea experienced mid-single digit growth thanks to its reputation as a better-for-you drink. Real-brewed tea which uses tea leaves as opposed to extracts or concentrates is a trend in the RTD tea category. Loose-leaf tea sales are also on the rise as consumers become more sophisticated in their tea consumption. Canned and bottled teas had sales of $3.6 billion in the 52 weeks ended May 14, a 3.4% increase. Top brands in the segment were AriZona ($645.7 million in sales, -3.6% change in sales) and Lipton Pure Leaf ($615.2 million, +6.4%). The loose-leaf and bagged tea category had total sales of $1.2 billion, a 1.4% increase year-over-year. Lipton ($243 million, -4.4%) and Bigelow ($156 million, +0.2%) were the best-selling loose-leaf and bagged tea brands. (Source: Beverage Industry, July 12, 2017)

While the overall juice category has been declining due to consumer concern about sugar, premium juice segments such as raw unpasteurized juices, cold-pressed juices, and juice smoothies have performed well. Super premium juices registered an 11% increase in wholesale dollar sales to $2.2 billion. The superpremium segment is forecast to grow to $3.2 billion by 2020. Natural and organic juices were up 7% and 23% respectively while GMO-free shelf-stable juices increased 30% year-over-year. Juice concentrates experienced sales increases of 4.5% while bottled juices were up 1.1%. Aseptic juices declined 0.7%, canned juices were down 1.6%, and refrigerated juices fell 1.5%. New nutrition labels which separate naturally occurring sugar from added sugar is expected to benefit the category. Today, only 12% of sales are attributed to a product claiming “No Added Sugars.” (Source: Beverage Industry, July 12, 2017)

Trend to Plant Based Waters and Milks

The trend toward healthy hydration has spawned a spate of plant-based waters which offer functional and nutritional benefits. Plant-based waters grew 20% by volume and 17% by dollar sales in 2016 topping $493 million in sales. The U.S. has become a major market for coconut water, the top performer in the category. A wide-range of plant-based drinks are entering the market including maple, birch, watermelon, and cactus. Some brands are experimenting with flavors though original/unflavored options tend to be bestsellers. The category is expected to grow to nearly $900 million by 2021, a compound annual growth rate of 13%. Approximately $100 million of the market will be plant-based waters other than coconut. (Source: Beverage Industry, July 12, 2017)

Since 2011, U.S. milk sales have fallen 11% by volume. The decline is partially due to a pivot away from cold breakfast cereals and partially attributed to the rise in plant-based milk alternatives. In response, dairies are testing new products including milk combined with puréed fruit, ultra-filtered milk, and milkshakes with antioxidants and prebiotic fiber. (Source: The Wall Street Journal, August 9, 2017)