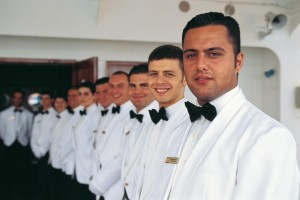 I went on my first cruise in January – 10 days in the South Pacific. It was a most interesting experience. Not the least of which was the people-watching value.

Quite coincidentally my Y gen son decided to take a 10 day South Pacific cruise with friends on a different cruise line. While extracting any details about the cruise was impossible for the first three days, on the fourth day, in the five minute drive to drop him at work, he commented on some things that had impressed him about the staff. I wanted to draw life lessons out for him on the spot, but alas he had to go before I got the chance. (Methinks there is method to his madness). So I get the chance to tell you in my blog instead.

If the title of the blog sounds somewhat familiar then you may have studied Shakespeare’s The Merchant of Venice at school. The actual quote was, “The quality of mercy is not strained, it droppeth as the gentle rain from heaven…”

My son’s first observations were about the characteristics of the dining room maître’d. He said he felt special having a person dressed in a suit clearing tables and enquiring if everything was alright with the food. There were plenty of vest-wearing staff to clear tables, but the matire’d did it with dignity and grace. The way the maître’d carried himself was also noticed – smiling, chin in, chest out. “He reeked of professionalism,” was how my son described it.

He went on to explain that their dinner table head and assistant waiter’s were very experienced and had travelled the world on ships. They were always willing to have a joke and were not just like smiling robots. They did not seem like waiters, but more like friends. These are the examples he gave:
• One night the assistant waiter brought a guitar to their table and asked if anyone could sing. They volunteered one of their female friends and another waiter joined her with written lyrics and they all sang together with the guitar.
• The wait staff regularly asked how they were feeling. One night one of the girls said she was feeling sick, upon which the assistant waiter disappeared and reappeared with a green apple presented on a plate, neatly sliced through almost to the bottom so it stayed together in segments. He explained that green apples were good for sea sickness.
• The wait staff told us jokes and gave us brain teasers to solve between courses.
When my son first boarded and went to his stateroom, the room steward introduced himself, asked everyone their name and then asked if they all had their luggage. All did except my son. The steward went immediately to the luggage area and collected his luggage so he could unpack and get settled with the others.
I asked him in what other ways he was surprised and delighted by the service onboard. He said:
• “Everyone was so personal. The Cruise Director and his staff were self-depreciating, placed themselves at the same level as the guests by making fun of each other, which set us at ease and made us laugh. They wandered around onboard always smiling and very visible.
• It was happy to read in their posted profiles that the Executive Chef was world class. He had worked on the QE2 and some of the biggest ships in the world. He had been head-hunted as one the best.”
What can one learn from this experience about serving patrons?
• You can express your professionalism and pride in your role on the outside through uniform, posture, smiling, modelling the behaviours you expect of your staff.
• A personable, friendly attitude goes a long way
• Be truly human and show genuine care and concern , Caring is not just lip service, it is demonstrating you care
• Be engaging, warm and have an easy humour – don’t be stuffy or superior
• You can minimise a patron’s potential displeasure in delays by engaging them in conversation
• Anticipating a patron’s needs and going the extra mile is always noticed and appreciated – even if nothing is said at the time
• Be visible and available to help as much as possible. Don’t disappear when things aren’t going as planned.
• Smile often. This is the single most powerful non-verbal cue that you are genuinely pleased to be of service

None of these service gestures came across as forced or insincere. They were spontaneous, genuine and made my son’s cruise experience enjoyable on a whole other level.

The quality of service is not strained, it droppeth as the gentle rain from heaven…”