In the good old bad days at Windsor Road, we had some tough times. We had roadworks obstructing vehicular access either in front of us, south or north of us the whole 5 years we lived there. My partner would sit by the roadside whittling Noah’s ark animals. We sold a complete Noah’s ark with animals worth $800 for $200 and I intermittently taught marketing at Hawkesbury Community College for a little extra income. We ate a lot of rice.

In those early days the rocking horses were made from truck loads of undressed scrap box timber from the box factory in Wilberforce which would be dumped in our yard. We evolved to buying $2000 slings of kiln-dried NZ radiata pine milled to the correct sizes.

Also from Wilberforce were cow tails from the abattoirs which we would collect and tan ourselves. It was a filthy job and you could not think about food at all on tanning day. We evolved to importing bespoke horse tails in a variety of colours from China – the world capital for horse hair.

Our original stirrups were made from hand bent aluminium bar and pop rivets and were replaced by importing sand cast and hand polished solid brass stirrups along with the brackets and snaffle bits from India. The swing irons which were cut, bent and threaded ourselves evolved to being done piece work by a retired engineer with the correct machinery at one-fifth the price of an engineering shop.

The nail-on pad saddles responsible for my weak wrists were replaced by miniature English riding saddles made in various colours and sizes and imported from India by piggy-backing on the container orders of a major horse accessories importer.

Simply because we did not have the capital, we focussed on incremental change and growth. The first incremental changes involved improving the perceived value of the horses to get the retail price up from $695.00.

Originally there was not a maker’s mark on the horses, so we set to work to design a brass nail-on plaque for the stand. The plaque maker traded a kit rocking horse for the cost of the initial engraving/set up and individual plaques were only $2.00 a piece. We later introduced a “Certificate of Authenticity “ and a “Certificate of Restoration” which were both hand signed by the maker and presented with the horses.

We improved the finish of the stands by routering the edges and sourcing a commercial turner to make the uprights.We turned the pillar uprights for the stands ourselves, which was ridiculously time-comsuming and relied on turning them exactly the same by eye!

Plastic Amber Crystal Eyes were replaced with German Glass Teddy Bear eyes with hand glued lashes – something which other makers have since copied.

During our growth phase it was very important to treat our suppliers well and pay them on time. As soon as we knew there would be a delay in payment, I was on the phone explaining the situation and nutting out an installment plan. At that time even our annual volumes were not large enough to be able to order from some suppliers. 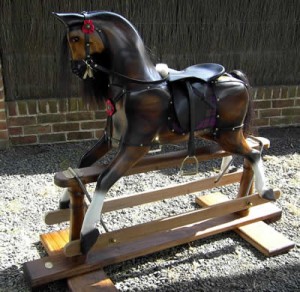 As the improvements kicked in, we increased the retail price of the horses about $100 per year to $1695 for a standard and $3750 for a large horse. These prices were still well below backyard operators and other specialist retailer’s prices of anywhere between $2000 and $6000. So we offered a beautiful product of  excellent value for a great price, what more could a customer want?